For direct payments in a local, peer to peer communities Circles works very well. For other use cases, there are shortcomings:

This is a collection of ideas to mediate the very strong peer to peer trust aspect of Circles and set a broader frame of Circles usage besides the major use case of peer to peer, local communities. 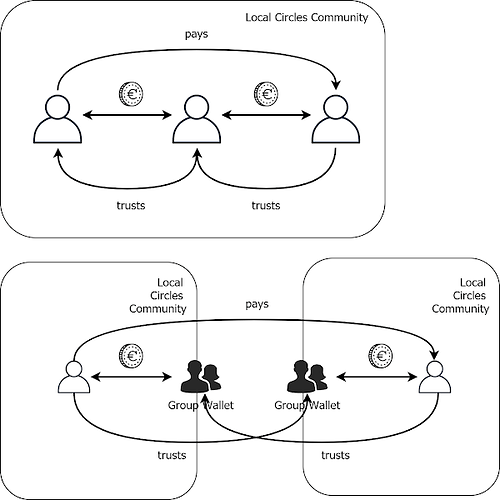 A Group can define rules which all members have to follow, ie. external Users can rely upon the enforcemenr of those rules. Members can easily be removed from the Group, they will keep everything they acquired up to this point, but cannot swap their Tokens for the Group Tokens after being removed from the Group.

With these prerequisites, Group Tokens might help in facilitating “Circles to Circles” payments, ie. payments of Users not directly or even indirectly known by other Users of the Group, with using their Group membership for credibility.

A Group might set up rules which should be followed by the Members. What could those rules be?

So are Group members forced to accept the Token no matter what? That would not work, so an intermediate solution might be:

Governance alone is a huge topic, almost not solvable in one shot. Therefore, Governance can start very easy and might have to change over time. Changing Governance in a running system is a very complex and risky task, this dynamic aspect of Governance must be understood and accepted by the Group members.

With Group Tokens, several Users combine their Circles to a unique Token which technically has one address.
If a Group becomes big enough, people might be interested in buying the Group Tokens. This can then be done by DEX and/or AMMs like HoneySwap on xDai.