Regarding our upcoming Munich Pilot of Circlesland, we stumbled upon a few challenges in the core HUB and TOKEN contracts and would like to start working towards a new Circles 2.0 contract update.

We should also as well split the minting and transfer related topics (HUB 2.0 contract) from the web-of-trust (TRUST 2.0. contract) topics.

The challenges we encountered are the following:

1a) transferThrough is too restrictive and needs to be fixed in its limitation.

During optimizing pathfinder related challenges, we found out the following problematic behavior in the transferThrough() method. Let’s imagine this. Alice is joining at day 1, Bob is joining at day 10. Alice has f.e. collected 1000 A-Circles until then, Bob has only collected 100 B-Circles so far. When Bob now trusts Alice 100%, we would think Alice should be able to send all her 1000 A-Circles to Bob via the transferThrough() method, but Alice can send only 100 Alice Circles, since inside the checkSendLimit() method the current calculation of the “max” value, depends on Bob’s own holdings of his own B-Circles.
The result of this behavior is that, in case Alice would have send all here A-Circles to someone directly, she wouldn’t be able to receive any more Circles at all transitively, but her own personal Circles.

If you decompose this line of code: https://github.com/CirclesUBI/circles-contracts/blob/0654dcc2a361c0736aa8c3553afd02b66263f940/contracts/Hub.sol#L229 you’ll find that the transferrable amount depends on the holdings of the receiver’s own tokens:

1b) Binary trust only
transferThrough should make trust binary, ether there is trust or not (remove the % trust limits).

As you all know, many users experience the problem of running into the 90 days deadman switch. We propose to completely remove this.

3) Shorter inflation rate intervals
Currently the 7% yearly inflation rate is calculated and updated only once per year, creating quite large jumps from one time interval to another. We propose to split this over the course of the year and do weekly update calculations.

4) Compatibility with group circle contracts
Regarding the first prototypes of Alex’s group circles, we found out that it is not possible to transitively change individual circles into group circles, because of some restrictions of the original HUB contract. This has been fixed in a fork by Alex and should be integrated into the 2.0 version.

5) Migrating balances
Regarding migrating old v1 balances into the version 2, we suggest adding to the signup method a second migration method, which allows existing v1 users to signup with their original v1 safe. In this process a new token will be created and all balances will be copied from the V1 Token to the the new V2 token. For this process, we can define a transition period of f.e. 3-6 months, where the migrate method is active. After block n, it should revert when called. Migration should be only possible to call once for each token migration.

7) Add a follow trust method to the TRUST 2.0 contract
Any user or orga should be able to follow trust any other safe. This can be documented via the blockchain events startFollowTrust and stopFollowTrust. The transferThrough needs to pick up those relations as well.

Other open Topics to be discussed:

Thanks for starting this discussion @samuelandert

I am not really in favour of simply removing it.
A reminder why we added it in the first place:
if a user looses access to a Safe they can only create a new Circles account. People would be required to trust the new account - however they should still trust the old one as otherwise those tokens would suddently become unspendable. This however creates the problem that you are now trusting 2 accounts of the same person that can still both produce UBI/Circles. So unless we have a solution to account recovery IMO we need the dead man switch. We should however change it in a way that other accounts can not delay it. We could also think about ways to make it easier to reactivate an account.

As you all know, many users experience the problem of running into the 90 days deadman switch. We propose to completely remove this.

I agree with point 1 a lot. We see from experiences in Berlin that many people have troubles sending bigger amounts to others who have less, among other issues. There’s still a lot of research to be done on how to improve transitive transactions in general and think this is a good improvement of it. It should definitely smooth out exchange between people. One small note: I would not refer to it as “Binary Trust” as it can confuse some people into thinking that binary trust means you can only send max 50% but as Trust and Don’t Trust and communicate that if you trust someone, it means you are willing to accept 100% of their circles credits.

About point 2: I agree with Martin that it may not be wise to simply remove it but create a social recovery mechanism that makes this a seamless process. I wonder if it is possible to link sets of public keys to one user, where only keys that went inactive can be connected and “embedded” to the person’s new crc basic income account? I know @ Adz has been doing some work around these types of implementations so it may be worth checking with the #bitspossessed .

From point 4 onwards I think requires a deeper discussion. What exactly was the issue Alex encountered with transitive transactions and group currencies ? - It’s a design question to define who decides which individual currencies can be “merged” into a group currency. I think it’s important to think of the trade-offs of the different ways in which this can happen. For example, from a contract level it should be possible to let people choose /set the limits to the amount(%) of CRC units they wish to be turned into group CRC.

From a research side it would be very interesting to model how group currencies could run on specific clusters, specially as we experiment more with dapp nodes. Do you think this is feasible to test out?

Thanks a lot for this issue compilation.

For the compatibility with Group Currencies, I wrote more about the changes here (Suggestion for group currencies - #5 by alculexum) - the change of the Hub.sol contract was to modify/loosen the validateTransferThrough (circles-contracts/OrgaHub.sol at master · ice09/circles-contracts · GitHub) but that might be wrong for other reasons, so feedback would be great.

I think the deadman switch problematic is a social problem and should be pushed to the edge of trusted peers.

@alculexum I like your idea, but how about we do it the other way around. An account stays active until a specified amount of trusted people is deactivating it. (we can work here with the variables of min f.e. 3, % f.e. 20% of my trusted friends, and max, f.e. 50 trusted friends and we might add additionally to this a default timeout deadman switch parameter of 1 year instead of 90 days.

Let’s try to split the deadman switch challenge up into the following 4 cases:

A user got hacked, but is still alive:
In this case, the user would tell his peers, to deactivate the original account and retrust a newly signed up successor user. The question here remains, if we should encourage or even enforce contract wise, to remove trust to those circles, making the hack a collateral damage for everyone.

A user lost his access key:
In this case, the user would tell his peers, to deactivate the original account and retrust the newly signed up successor user. When the user finds his key again, he could still transfer his old assets to his new safe, but can not mint ubi on the old account anymore.

A user died:
In this case, the trusted users would claim, that a person died and once the predefined threshold of claims is reached, the account gets deactivated and can not mint ubi anymore.

A user got mobbed by his peers:
In this case, the user would have been deactivated falsely by his trusted peers. His only option is to -re-start completely a fresh and get re-trusted by a different community of friends.

Another topic is about updating and changing parameters in the new CirclesHUB 2.0 contract.
I am currently researching the capabilities of the 1hive garden DAO’s interface. They have a very genius combination of conviction voting (see: Gardens Launch Party 🌻🎊 - YouTube) and decision voting.
There it would be theoretically possible to make some parameters of the HUB contract updatable, when we give the voting app contract of 1hive the permission to execute update calls on the CirclesHUB 2.0 contract.

Sounds complicated to me, especially the last case will happen a lot I think and gives people direct power of wealth of other people, that doesn’t feel good to me.

About the other way around, why wouldn’t it work? I don’t see misuse here, if I want to keep my account alive I do. If I have myself as a false trust I can reactivate my account, but this I could do anyways. Also there is no misuse possible by others as they can just reactivate. Just in case of user died/lost keys someone could still use the old CRC, but that would vanish as the user would have to re-trust everyone and those would then have to untrust the first account. This could probably be supported by a decent UI/UX.

I think it would strengthen the trust network this way around. The last case can happen anyhow via untrusting, so this is a generell social dilemma of the web-of-trust itself.
What you can always do to intervene misuse is to put a timeout veto in-between deactivating. So, when the user still has access he can stop the deactivation process for example for a period of 1 week.

Yes, but untrusting seems more an individual decision to me, the deactivation is more a “mobbing attack” then. But a veto could be useful anyways, with this also other mechanisms for deactivation could be possible (like I name someone who can deactivate me, but I can also veto if that was misused).

Maybe we should play with the variables here, as you said make them more strict and explicit. I can name f.e. 3 out 5 trusted persons, which can do this for me, including a timeout period. Same goes later for proper social recovery.

I have made a GitHub fork of the contracts and added all the topics into separate issues: 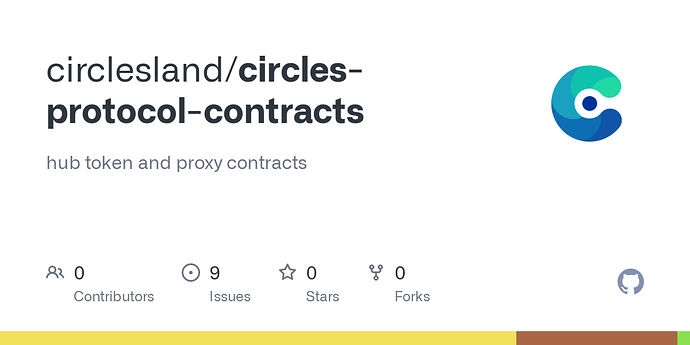 hub token and proxy contracts. Contribute to circlesland/circles-protocol-contracts development by creating an account on GitHub.

General Questions that we have

Following our meeting, we saw the path forward as:

Let me know if something is too unclear. It is a brief summary of all the things we internally discussed so far.

Thanks for all the input. Since this topic becomes cluttered with too many different challenges to be tackled, I am pulling them each out into separate proposals to be discussed and defined in more detail.

I would like to continue in this thread the core contract architecture discussions, around modularization and clarification of fixed non-changeable and flexible upgradeable parameters via opt-in extensions.

So far we agreed during our Berlin-Workshop on the following:

As discussed in the All Stars meeting today between the Circles Coop, Circles Land and Bitspossessed, here is the suggested Roadmap for making Circles 2.0 reality

Thanks for the timeline! If there you are interested I am happy to participate in the discussions about contract updates and group currency (tech) things, just ping me in Telegram.